Today (28 October 2021) we have released our A National Voice (ANV) response to The Case for Change report published by the Independent Review of Children’s Social Care.

We heard from over 300 care experienced children and young people. They have highlighted an end to the unfair “postcode lottery” which, sees young people receive varying levels of support not only across the country, but sometimes within the same local authority and the negative impact of “cliff edges”, following the sudden withdrawal of support that leaves many care leavers struggling to cope both emotionally and financially, as key issues. 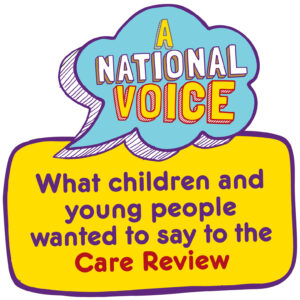 In March 2021, the independent review of social care announced it would work with ANV to enable care experienced children and young people across the country have their say on what needs to change. To gauge responses to The Case for Change report, ANV Ambassadors, created workshop packs for Children in Care Councils across the country, supporting them to run sessions locally. ANV received feedback from a diverse mix of 309 children and young people across 31 local authorities with extensive geographical coverage across England. The respondents also represented a broad range in terms of age, gender, ethnicity and Special Educational Needs status.

The report, finds that care often felt like a lottery to children and young people, with good support dependent on being lucky enough to live in the right area. In one case, twin sisters, who were taken into care separately within the same local authority, reported vastly different experiences, with one twin staying in five placements over the course of her time in care while the other twin had lived in 49 different placements over the same period. The level of financial support also varied with one twin receiving a £1,000 leaving care grant while the other was given £2,000. 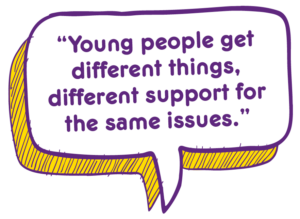 Young people reported that “cliff edges” had not only put them in a precarious financial position but also left them feeling disregarded and ill-equipped to move on to independent living. One young person said: “Being in care was life-changing. Every aspect of my life is still affected by it. I don’t think there is enough time to process all the trauma before you leave care and all the stress and headaches come back.” 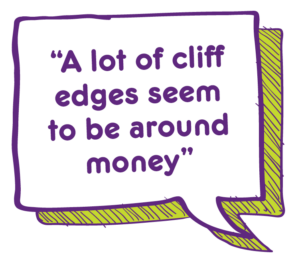 Children and young people also reported feelings of loneliness, struggling with their mental health and the difficulties they face in accessing mental health services. They believed that social workers and other professionals should have more training to recognise and understand trauma and the impact it has on young people’s lives. One young person said: “It can be lonely during the harder times, like significant changes, like when you’re first put into foster care. You have just left your family and moving into a place with people you don’t know.”

Young people also felt that they would benefit from a more integrated service and that care-experienced young people should automatically receive counselling and other mental health services. The responses also highlighted the need for early mental health intervention before issues escalate, as one young person put it: “Should be able to access a therapist not just when thinking about self-harm.” 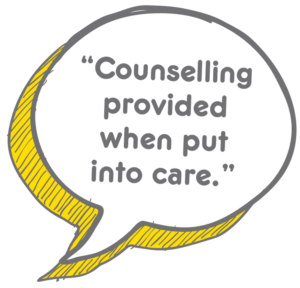 The need for better practical and financial support to prepare young people for independence was also highlighted. Many noted the importance of gaining experience earlier in cooking, budgeting and other household skills in the run up to independent living to soften the transition. Young people also wanted better and clearer financial packages and called for local authorities to reduce the costs they faced in areas such as travel, council tax and housing.

Responses collated also showed that children and young people wanted fewer changes in social workers, to feel listened to and participate more in decision making, and time with their birth families. They reported that they felt good care was where you felt safe, supported and had fun. One young person said: “A home is where you feel safe, it’s homely, comfortable, and decorated nice, you feel part of the family, you’re listened to and you have your own space.” 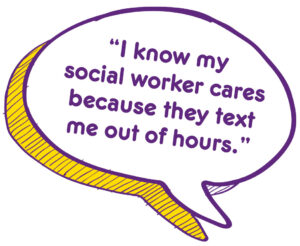 Linda Briheim-Crookall, Head of Policy and Practice Development at Coram Voice, said: “I would like to thank the hundreds of children and young people from all over England who have told us very clearly about the changes they would like to see.

“They want to be treated fairly and this means an end to the postcode lottery and abrupt cliff edges that put their wellbeing and financial stability at risk. There is a need for better and more consistent practice across the country and professionals who are trained to fully understand the emotional and financial issues that young people are facing.

“Services need to be well resourced and designed with young people in mind if we are serious about transforming children’s experience of care for the better and preparing them to succeed in life. It’s so important as the care review progresses, that children and young people’s voices, views and experiences are at the heart of change.”

Josh MacAlister, Chair of the Independent Review of Children’s Social Care, said: “It’s fantastic to see the work of the A National Voice ambassadors come together with this report.

“It echoes what we have found across all of our engagement so far – care experienced young people are able to bring a unique and valuable perspective and have lots of ideas about how to make a positive difference.

“Some really important issues have been highlighted and we will be carefully analysing the feedback to help us develop the best possible set of recommendations. I’d like to thank everyone who contributed to this important piece of work for sharing your insight so generously.”